Airport Recycling: Get on Board

With people travelling more than ever before, enhancing an airport's recycling program is likely to be a core objective of operational planning. Airports are already under growing pressure to increase their sustainability efforts but these are often concentrated on minimizing fuel emissions. Whilst aviation emissions remain a serious issue in our bid to tackle climate change, recycling is another method that can help to reduce the environmental impacts of air travel.

Beyond the obvious environmental benefits of recycling, introducing a program into an airport could help to reduce your waste hauling costs, generate positive public relations and reduce your carbon footprint. Whilst rolling out a full-scale recycling program may not be immediately viable, addressing waste generated by administrative offices, terminal areas and restaurants could be an initial step. So what can forward-thinking airports do? 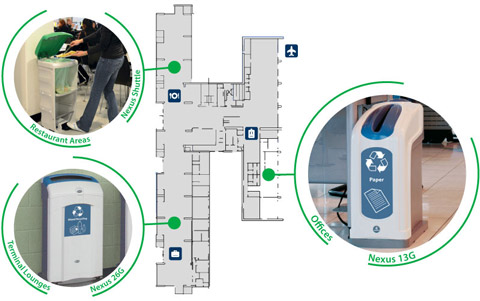 With the highest concentration of passengers often found in retail areas, terminal lounges and restaurants, these environments are likely to generate the greatest volumes of waste. By segregating these waste items through a comprehensive recycling program, reclaimable materials can be diverted from traditional disposal routes, reducing the amount of waste that is otherwise sent to landfill. This could create cost savings through better negotiated waste contracts and increased efficiencies in waste management.

Further consideration could be given to administrative offices who often yield several waste streams including paper, ink/printer cartridges, batteries, general trash and food waste. This waste can also be responsibly managed through smaller-scale recycling programs in either commingled or single stream systems.

Implementing an airport-wide recycling program may require collaboration with staff, passengers and service partner companies to segregate materials wherever possible. But by making small changes where you can, it could promote a recycling culture among your staff and increase your recycling rates along the way.

Signup to receive our e-newsletter